Years ago, I did a small article about Gary Larson, an Illustrator, particularly bright for his sense of humor and his short stories in one, two or three pictures.

All these years I wanted to honor him and picking up one of his hilarious story below: 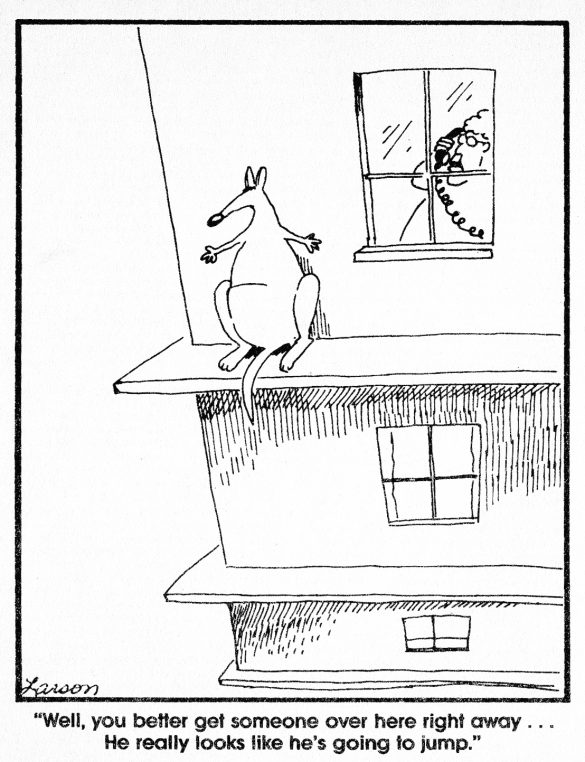 I had found a food to make, but in the end it was not as funny as the drawing. So I left the idea aside until we find a simple ellipse to translate this joke.

In the end, an old photo should have put me on the track (more soft will be falling) and so the jumper Kangaroo found a food in line with its nature. 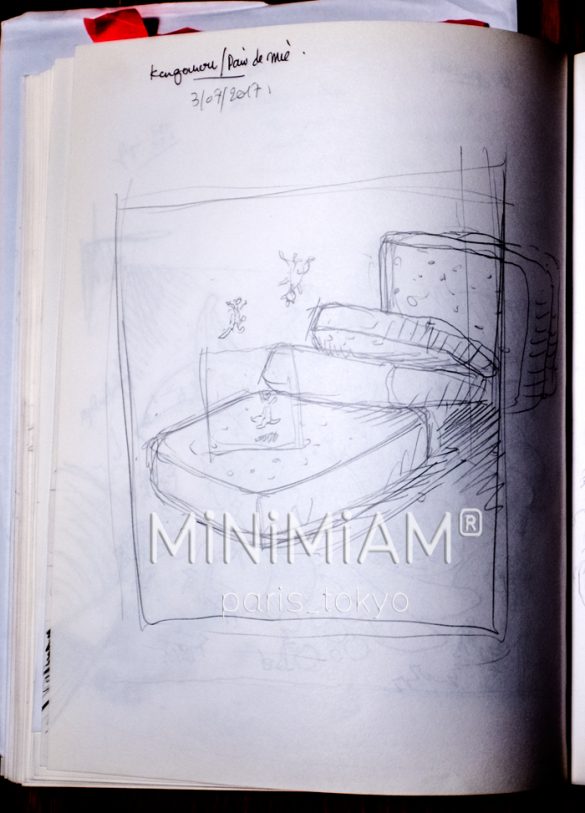 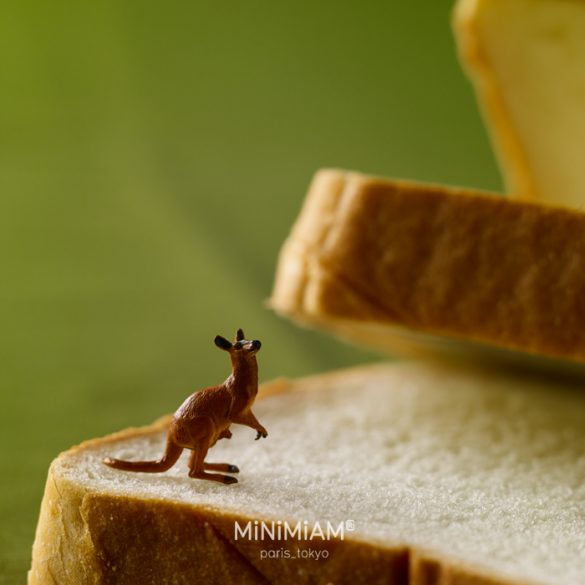 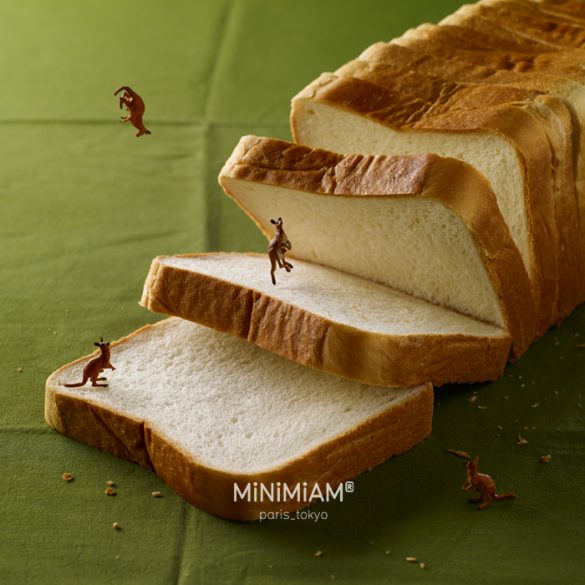 More soft will be falling picture.

The Ikura is the Japanese name for salmon eggs.
The ikura is a delicacy enjoyed with a good rice, and who is as simple as supremely delicious.

For a long time I had the idea to make a meeting between visitors from space thinking that salmon eggs were their cousins (the transparent sphere of the egg makes me think of a spacesuit to the Tintin’s adventures on moon).

I stumbled on the idea for a long time, because that’s not enough to tell a story that is apt, even if offset and the invention brought by science fiction allows us usually to… do anything.

This is where knowledge of Akiko were precious! She directed me to a brand of canned salmon typically Japanese, very popular: AKEBONO. The tin box is beautiful. So I had the vehicle and the reason for the visit! 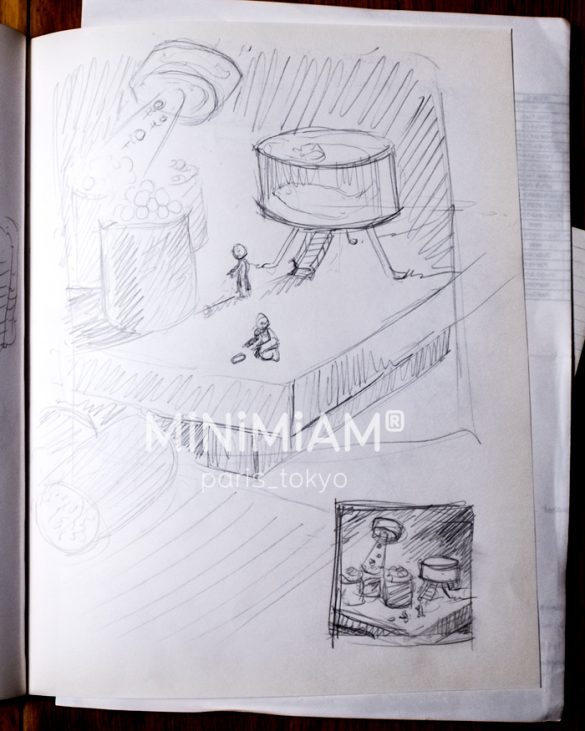 The salmon boxes are found in France, and we warmly thank Kumi Shimizu for the purchase and the sending of several boxes. 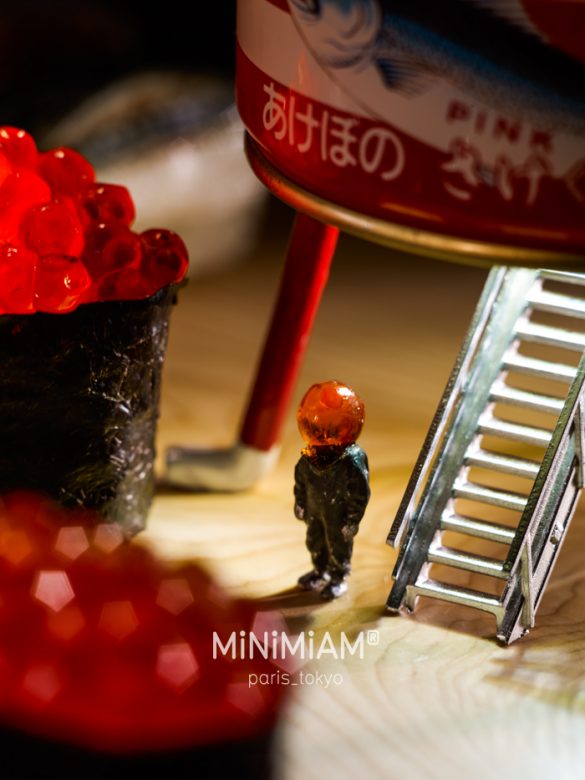 The title of the image is “Mother Ship”. 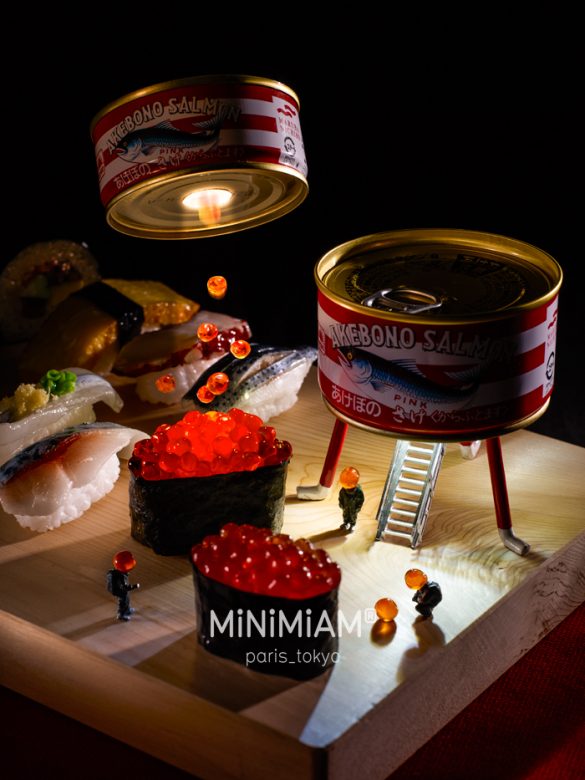 Thanks to Clement and Masumi and the TSUBAME (Paris 9th) restaurant for the loan of a magnificent centuries-old Cypress Board that served as a base for the landing of the Akebonospace adventurers.

Here’s an idea that waiting in our boxes… for too long.(The first sketch was dated November 2009) 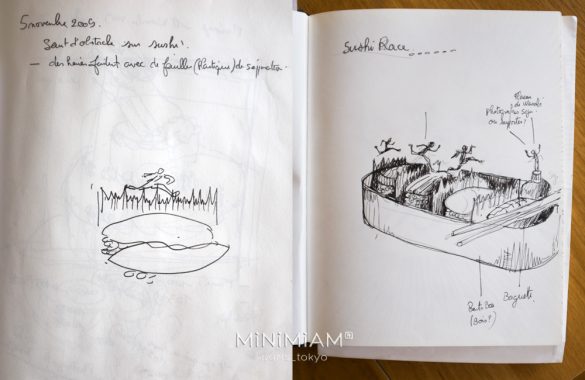 The very simple idea was to use these false leaves are used for separation in plate of nigiri sushi. 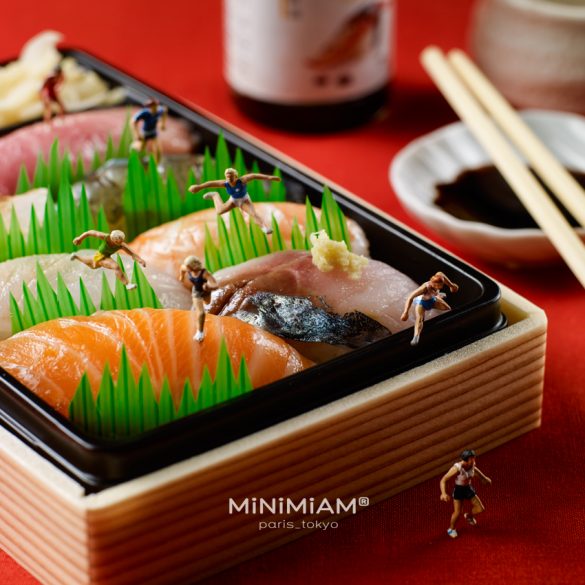 Thanks to the restaurant Izumi and his Chief Kazuhiro Takahashi (Paris 8th) and Patrick Duval for the making sushis.

A cover that has bankrupt emerge, and for cause, before printing, the direction of the communication of the city of Nantes changed his mind! (We did me a lot, but this one was new).

Nevertheless it was a great project with the friendly meeting of David Corvaisier of the Citizen Press Agency. 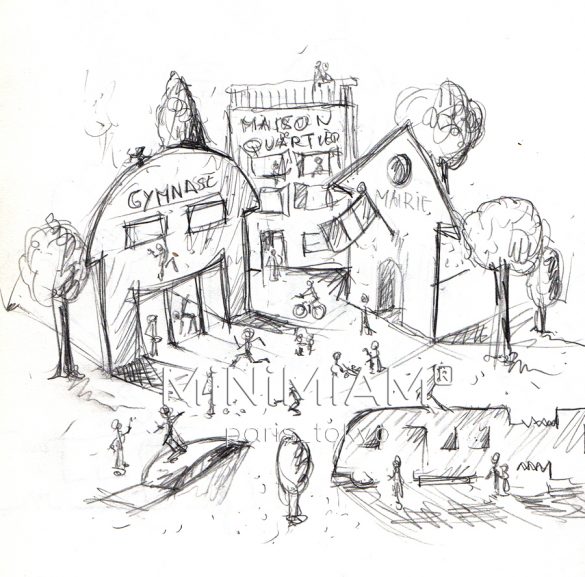 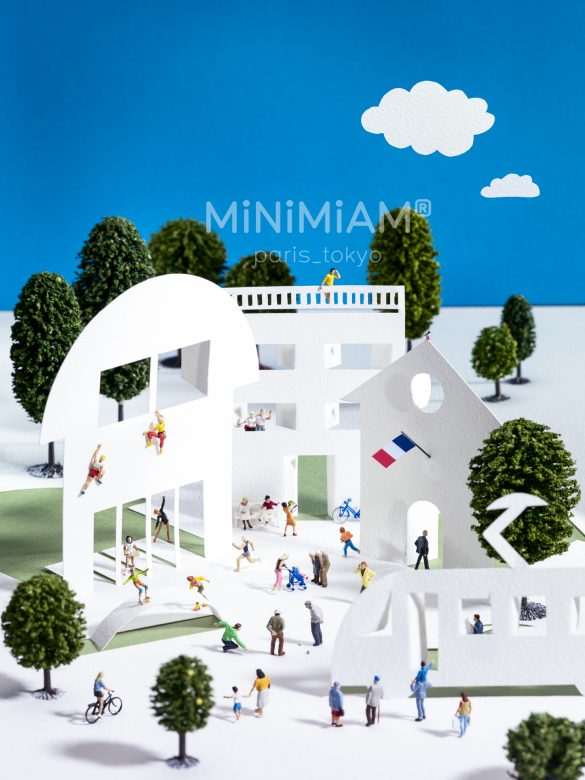 Coverage you could see.

.. .and the adventure.
My native Burgundy carried me to become a Knight of the Tastevin, the largest brotherhood Burgundian, and perhaps the greatest gastronomic Brotherhood of share the number of confreres across the world.

Each year, several chapters (banquets) brings together in the cellar Cistercian of the castle of Clos Vougeot 600 guests, and each chapter a theme with the illustration of the menu.
A honorary president is invited, in connection with the theme, which is in addition to the harvest: the adventure.

This year it was Bertrand Piccard (who came for the 6th time) who as the pointed out the great master, is a “scholadventurer” with his trip around the world using the Solar Impulse, plane moves by single solar energy.

Following an idea about the harvest, I therefore proposed an idea of photo to illustrate the menu. 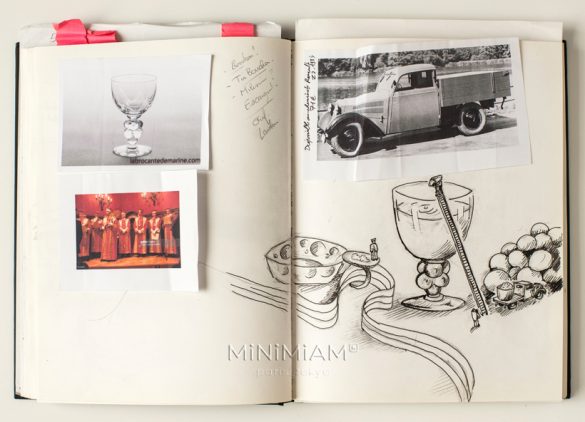 Several elements should be included
-The grapes
-The tastevin
-Clos Vougeot

Searching on the internet I discovered that the prestigious manufacturer Lalique had published a series of glass “Clos de Vougeot” in the seventies, glass whose foot is a bunch of grapes. Fortunately the brotherhood possessed in their stock one of these glass, engraved with the coat of arms of the brotherhood.

In the Visual, can be found:
-a truck Peugeot from the 1930s (years of the creation of the brotherhood)
-the Lalique glass
-Four harvesters
-A tastevin with its grand master trying to order it
-the solar impulse that is taking shape in the distance. 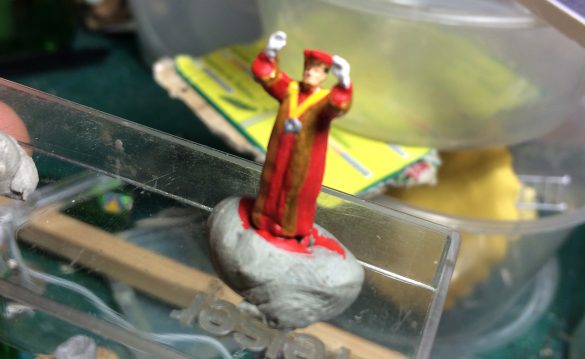 The picture was taken three weeks before the chapter during the harvest and this is how I got four beautiful bunch of grapes of the Clos de Vougeot from of the parcel of François Labet (Château de la Tour), a pinot Noir sweet with fleshy skin. (2017 will be a great vintage indeed.) 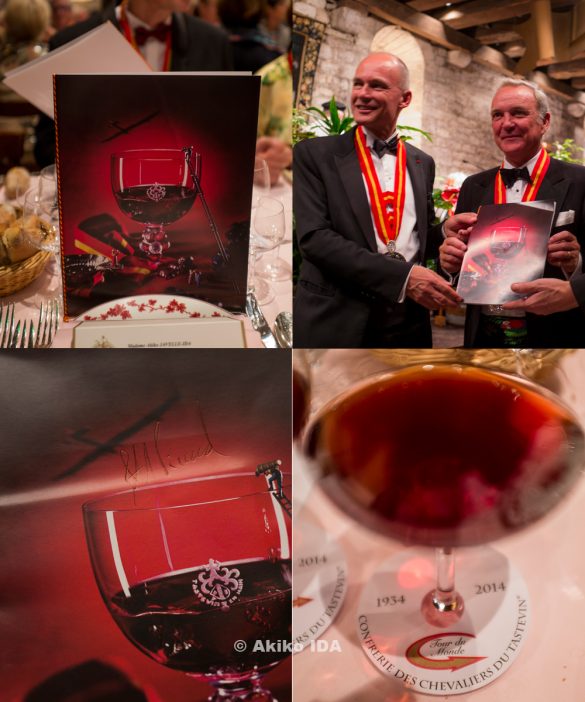 During the meal, we had the chance to sample two identical wines, Corton grand cru les Renardes 2007, “having made a tour of Winery and the same wine that made a trip around the world in 80 days.” (But not aboard the Solar Impulse) 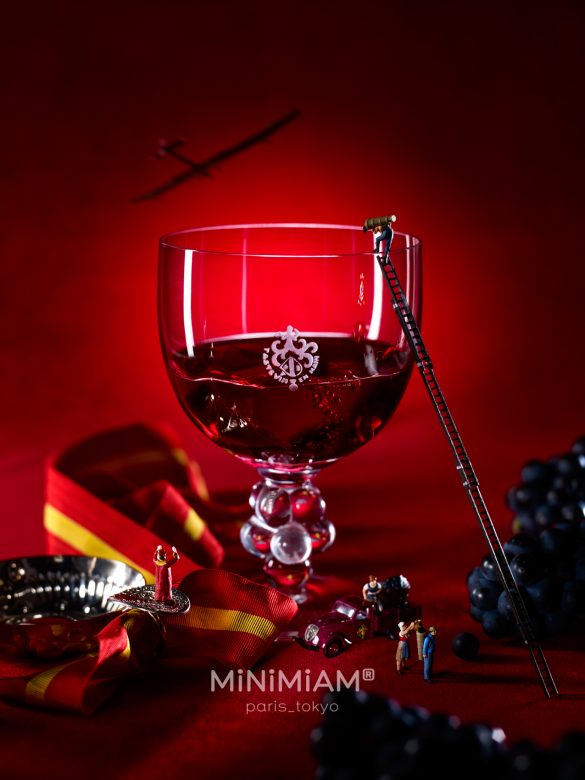